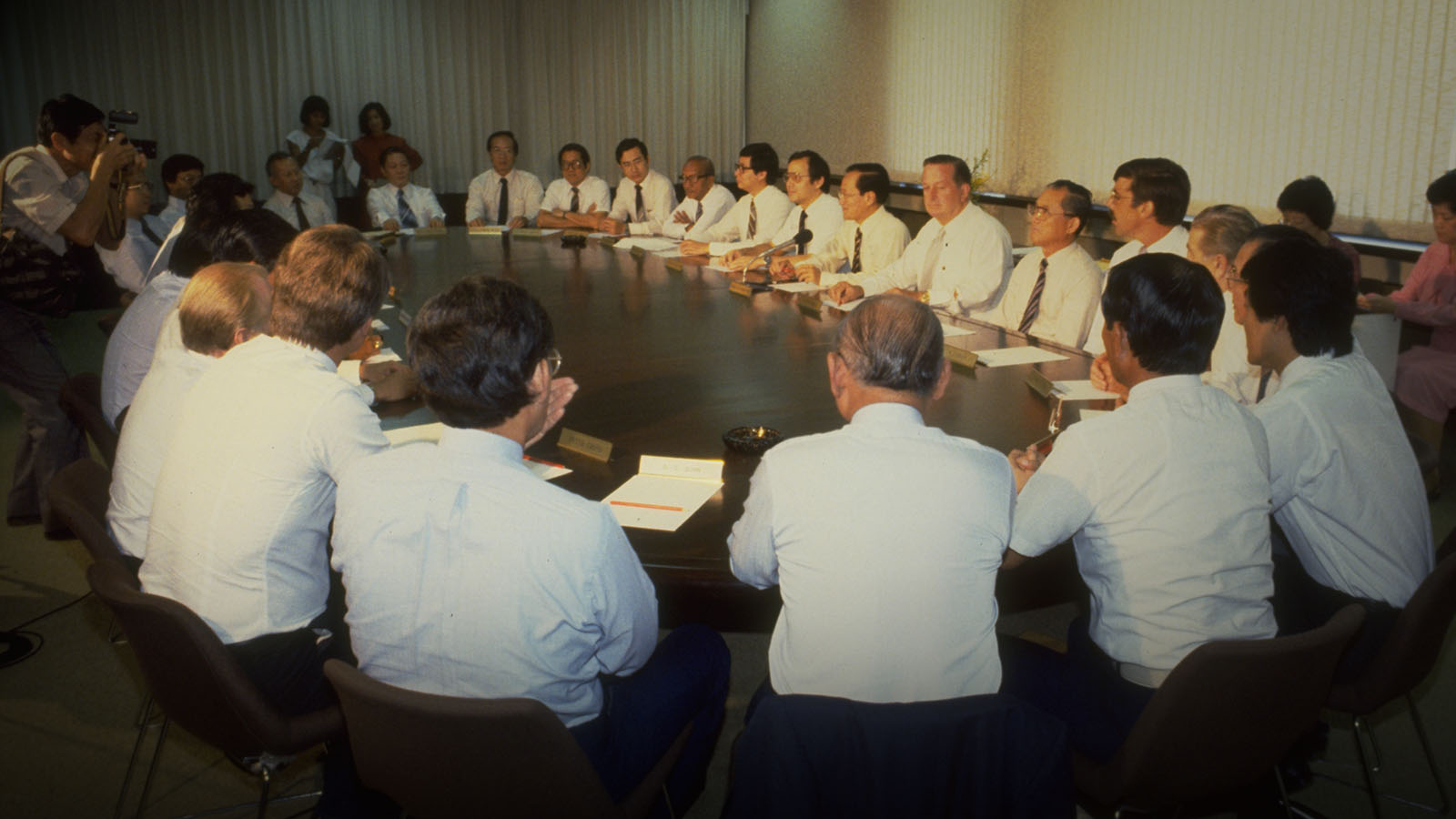 The Labour Movement’s first post-independence test was during the 1985 economic recession when the tripartite Economic Committee recommended wage freezes and reduction in CPF contributions. The NTUC supported this to keep workers in their jobs.

Singapore’s economy had done well between the 1960s and the 1980s despite the shocks of the British pull-out in 1971 and the OPEC oil embargo. However, Singapore suffered its first post-independence recession in 1985. Internal and external factors were responsible for the recession, but it was serious enough for the Government to appoint a tripartite Economic Committee to assess the economy and chart new directions for growth. The recession also proved to be an important stress test for tripartism. Wages had to be kept low to keep the cost of business down. The NTUC agreed to forgo wage adjustments recommended by the National Wages Council. At the same time, it accepted a 15-percentage point reduction in employers’ contribution to the employees’ Central Provident Fund.

That the NTUC and its affiliated unions could mobilise workers to accept those painful decisions showed the deep trust workers had in the Labour Movement.

Beyond wage adjustments, the NTUC also embarked on programmes to retrain the workers. One of the earliest was the Basic Education and Skills Training (BEST) programme which was initiated in 1982 to provide classes for workers who had less than a Primary Six education. Over the years, other skills programmes have been implemented, including the Worker Improvement through Secondary Education (WISE); the Critical Enabling Skills Training (CREST); and the Skills Redevelopment Programme (SRP). Funds have also been made available for training through the NTUC’s Education and Training Fund.

During Ong Teng Cheong’s tenure as Secretary-General (1983–1993), the NTUC focused on workers’ social, recreational, educational and cultural needs. This led to the building of facilities such as the NTUC Resort in Pasir Ris and Sentosa, the NTUC Club and the Orchid Country Club to raise the quality of life for union members.

In 1983, Ong Teng Cheong succeeded Lim Chee Onn as Secretary-General of the NTUC. During his decade-long tenure, Ong focused on providing more recreational facilities for the workers. He felt that NTUC should also cater to workers’ social, recreational, educational and cultural needs. One of his first projects was the NTUC Club which he established in 1986 to ‘give an identity to union members’ as well as to ‘serve as a focal point’ for interactions between members, ex-members and their families. NTUC Club also offered a wide array of facilities and activities, such as free use of public swimming pools and discounts at NTUC FairPrice supermarkets. In 1987, the NTUC Club opened its first clubhouse at the NTUC Annexe in Shenton Way.

Another major facility was the NTUC Pasir Ris Resort, the largest of its kind in Singapore, when it opened in 1988.

This was built at a cost of $38 million with funds from the Singapore Labour Foundation, the NTUC and other well-wishers. It had 396 chalets which members and guests could rent. The 14.7-hectare resort was also outfitted with numerous sports facilities, such as swimming pools, tennis courts, and a football field. A similar beach resort, but with no-frills hostel-style accommodation, was built on Sentosa. It opened in June 1994.

In 1990, the Singapore Labour Foundation launched the Orchid Country Club, a club with a 27-hole golf course. Developed over a 100-hectare piece of land in Yishun, the Club was instantly popular. The Club was completed in phases between 1993 and 1995, and the first phase was declared open in October 1993 by Ong, who had by this time been elected President of Singapore.