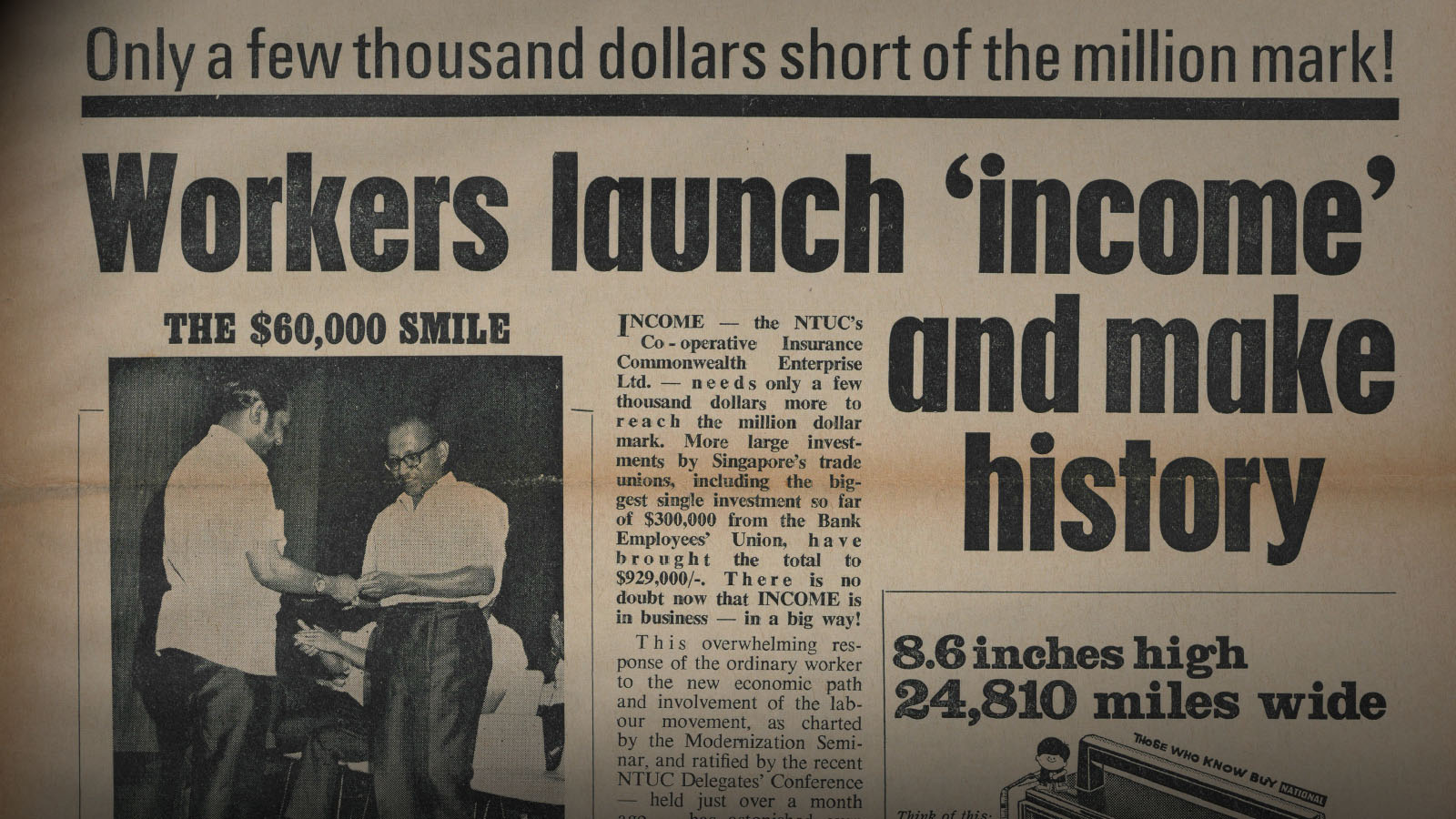 Tripartism – the trusted relationship between workers, employers and the Government was buttressed through the setting up of the tripartite National Wages Council in 1972.

In 1964, as part of the People’s Action Party (PAP) Government’s aim to harness the trade unions for development, Finance Minister Goh Keng Swee proposed a Charter of Industrial Progress and a Productivity Code of Practice. Goh expected that the Charter would strengthen Singapore’s competitiveness ‘by introducing efficient management and production techniques, and with the full-hearted co-operation of the trade unions.’ On 15 January 1965, representatives from the NTUC, the Singapore Manufacturers’ Association and the Singapore Employers’ Federation signed the Charter for Industrial Progress and Productivity Code of Practice. The Charter ‘set forth the basic objectives of achieving higher productivity through closer co-operation between workers and employers on a common understanding of industrial progress through industrial partnership, justice and peace.’ This was the start of the tripartite cooperation model of industrial relations.

In 1970, the NTUC called for the establishment of a tripartite body consisting of representatives of government, management and organised labour on which would be placed the responsibility for the equitable formulation and implementation of the guidelines for wage increases, industry by industry, according to a flexible formula that will do justice to the varying conditions of economic activity and growth in Singapore.

In response, the Ministry of Labour announced the establishment of the National Wages Council under the chairmanship of Professor Lim Chong Yah from the University of Singapore in February 1972. The tripartite body would be responsible for:

A key proposal that excited the unions at the NTUC’s Trade Union Seminar on Modernization of the Labour Movement was NTUC’s plan to form co-operatives for their members’ benefit. These co-operatives had to be commercially competitive, professionally-managed and run with the highest standards of integrity.

For the Modernization Seminar of 1969, Professor Tom Elliott prepared a discussion paper entitled ‘Co-operation’, which formed the basis for discussions on how the NTUC could establish co-operatives for its members. In his keynote speech, Finance Minister Goh Keng Swee referred to Elliott’s paper and strongly suggested that the trade union movement could usefully start with life insurance co-operatives. This was best since the NTUC could leverage its wide-ranging trade union networks to compete effectively. This would provide a solid financial base upon which the business could be built and upon which a possible Co-operative Bank or Workers’ Bank could in future be created.

The next possibility was consumer co-operatives and Goh suggested a co-operative store in a major housing estate like Queenstown. Third, trade unions could be involved in producer co-operatives – to make or design goods for sale – and he mentioned the Ex-Detainees’ Association which succeeded in setting up a Producers’ Co-operative engaged in the production of shoes.

Goh did not see any special advantage the co-operative movement would enjoy in the setting up of agricultural or investment co-operatives.

Goh also laid down four principles upon which the co-operatives should be run. The first is that the co-operative must be fully competitive with private enterprises. Second, that the labour movement engages in co-operative enterprises in those fields in which it has a natural built-in advantage. Third, that the highest standards of integrity must be established and maintained; and finally, that the co-operative must have effective management. The seminar’s delegates deliberated these proposals in ‘Workshop B’ and proposed and endorsed a plan of action adopting Goh’s plan seriatim. The seminar’s delegates were also keen on ‘industrial co-operatives’ and proposed to undertake feasibility studies on industries as varied as holiday tours to carpentry for low-cost house furniture.

Following the NTUC’s Trade Union Seminar on Modernization of the Labour Movement in 1969, the NTUC established a number of co-operatives: Income (insurance); Welcome (supermarket); Denticare (dental services); Fairdeal (school textbooks), and many other social enterprises over the years to cater to members’ evolving needs.

Following the Modernization Seminar in 1969, the NTUC began to establish a number of cooperatives. Almost immediately after the Seminar, NTUC announced that it would set up a personal insurance co-operative which it named NTUC Income. Up till this time, low-income workers had often been left without insurance coverage, with their families landing in desperate financial straits when breadwinners were suddenly stricken by injury or illness. Income developed schemes for unions to buy insurance for their members, with low premiums co-paid by the unions and the workers. Union leaders were tapped on as Income organisers, helping to encourage workers to take up critical insurance policies.

In 1970, NTUC announced the formation of its second co-operative – Comfort. This was a taxi co-operative that made it affordable for the more than 14,000 holders of taxi licences to rent and drive taxis. The establishment of Comfort would solve two problems – first to reduce the number of illegal or ‘pirate taxis’ on the road; and second to increase the number of taxis on the roads.

The third type of cooperative established by the unions were consumer co-operatives – specifically, co-operative supermarkets which would sell essential commodities like rice, sugar and cooking oil at reasonable prices and to combat unscrupulous traders who hoarded and profiteered.

NTUC established two other lesser-known cooperatives in the 1970s. The first was Denticare, in 1972 to provide affordable dental health care to its members. Today, Denticare is one of three brands managed by NTUC Health Co-operative. The second was Fairdeal, a school textbook bookshop co-operative which operated in schools. At its peak, Fairdeal operated bookstores in 35 schools. It was wound up in 1981 as it had not been doing well for the preceding three years. In its ceaseless efforts to bring the best value to its members, the NTUC has established many other social enterprises over the years to cater to their evolving needs.

The NTUC’s close relationship with the People’s Action Party (PAP) Government allowed workers to be represented well through institutionalised practices and structures.

Since the split in the PAP in 1961 and the consequential dissolution of Singapore Trades Union Congress (STUC), the NTUC has supported the PAP and vice-versa. Indeed, as a key promise, the PAP Government offered land and money for the building of the Singapore Conference Hall and Trade Union House in Shenton Way as the headquarters of the Labour Movement. Further support for workers came in 1977, when Parliament passed legislation to establish the Singapore Labour Foundation. This statutory board is charged with promoting the welfare of union members and their families and advancing trade union development in Singapore.

The Foundation also provides financial support for various educational, social, cultural and recreational activities organised by the NTUC and its affiliated unions and co-operatives. This symbiotic relationship had been based purely on a shared past battling the pro-Communists and on the shared mission of serving workers and Singaporeans.

In May 1979, Prime Minister Lee Kuan Yew openly pondered the future of this relationship after a new generation of leaders took charge. A year later, NTUC Secretary-General CV Devan Nair suggested that rather than leave things to chance, the NTUC-PAP relationship should be formalised. To this end, he proposed the establishment of a liaison committee to coordinate political, governmental and trade union policies and objectives.

In September 1980, to institutionalise the NTUC-PAP symbiotic relationship, the NTUC’s new Secretary- General, Lim Chee Onn was appointed Minister without Portfolio in the PAP Government. Lim’s appointment was aimed at enabling workers and unions to voice their views and interests whilst issues were being discussed in cabinet and before decisions were made. This method of considering workers interests in policy making would be far more effective than to have workers left with no choice but to take industrial action after policies are made.