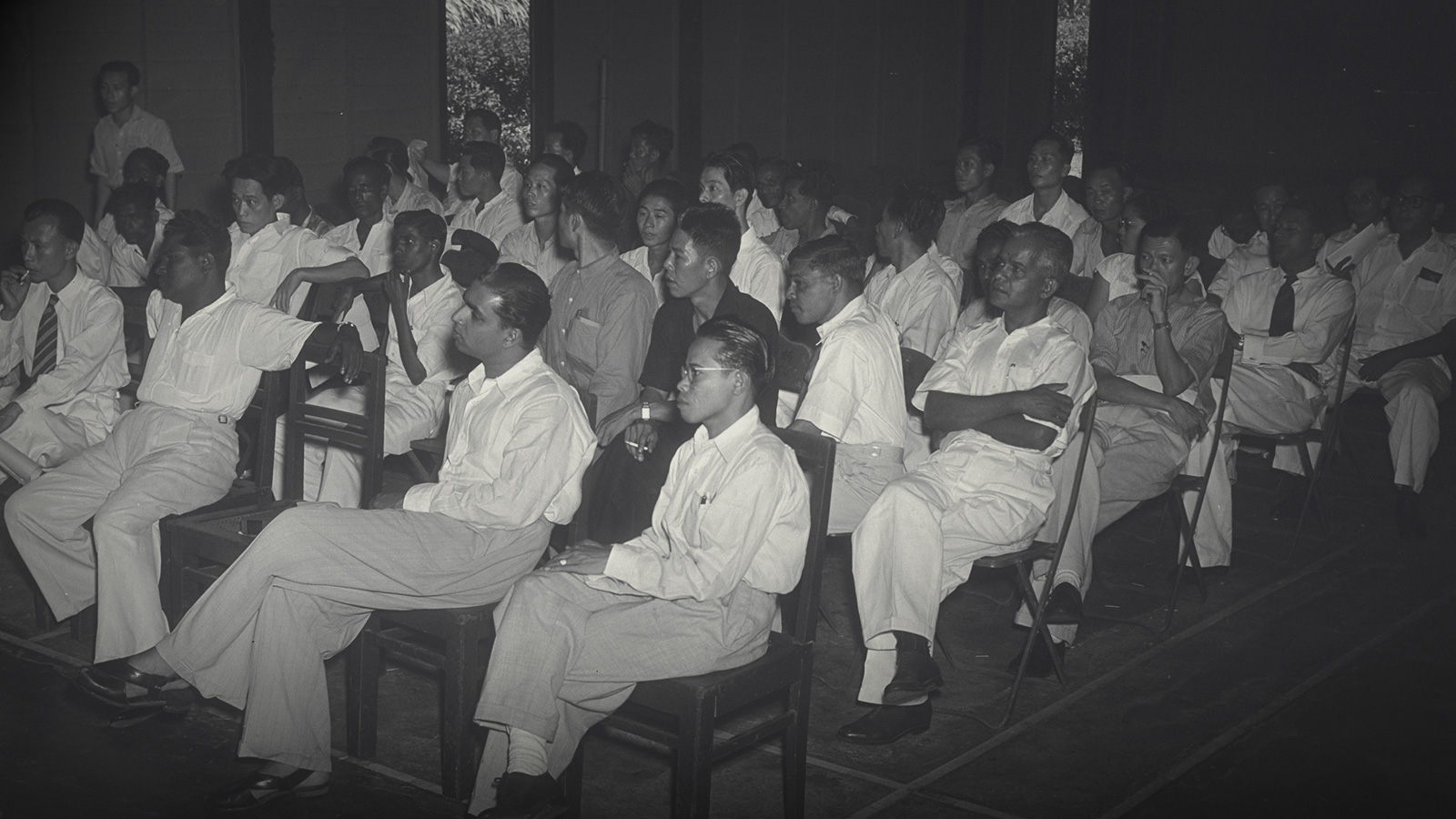 Between 1949 and 1951, efforts were made to establish a federation of labour unions along the lines of the British Trade Union Congress. The most successful of these was the Singapore Trades Union Congress (STUC) which was formed in 1951.

Throughout 1949, there were several efforts to establish a new federation of labour unions along the lines of the British Trade Union Congress. By November 1949, there were three rival trade union congresses vying for control over Singapore's workers. First to emerge was Lim Yew Hock's Trade Unions Council, followed by the Singapore Workers' Trade Union Congress – which consisted of 27 English-speaking trade unions led by RK Samy – and then the Singapore Trades Union Congress under SS Manyam. At a meeting at the Victoria Memorial Hall on 8 January 1950, trade union leaders resolved to establish a united congress. After more than a year of set-backs, the STUC was established in May 1951 under the leadership of Lim Yew Hock. In December that year, it became an affiliate of the International Confederation of Free Trade Unions (ICFTU).

When the STUC gathered for its first annual congress on 30 September 1951, only 28 unions out of 167 in Singapore were represented. Only a sprinkling of those representing industrial labour were present.

This brought home the fact that Singapore's early labour movement was being spearheaded by English-educated or English-speaking trade unionists representing mainly white-collar workers, most of whom were from the public sector. Most of the Chinese-educated industrial workers, who were in the private sector and who had formed the SFTU's base were left out in the cold. These included bus drivers and conductors, rubber plantation workers, and general factory workers.

While the Emergency Regulations were designed to eradicate the Communist Party of Malaya's influence from the trade unions, they were not designed to outlaw legitimate trade union activity. Many of the industrial trade unions began amalgamating under umbrella union bodies such as the Singapore Bus Workers' Union (SBWU) and the Singapore Factory and Shop Workers' Union (SFSWU) which had been established in 1954 under the leadership of the pro-Communist unionist, Lim Chin Siong. The SFSWU started with a membership of only 200 workers but swelled to over 30,000 members within 10 months.

As Singapore edged towards self-government, political parties began courting the various trade unions for support since they had a ready-made political base. As the contest for political domination heightened, unions also became more militant, calling for strikes at the slightest provocation.

As Singapore edged towards self-government, its leading political parties began aligning themselves with the various trade unions since they provided a ready political base of potential workers and party workers. The Singapore Labour Party and the Singapore Socialist Party (who later merged to form the Labour Front) were aligned with the Singapore Trades Union Congress (STUC) unions, while the People's Action Party (PAP), which had been inaugurated on 21 November 1954, aligned itself with the left-wing unions led by Chinese-educated trade unionists like Lim Chin Siong and Fong Swee Suan. It was thus no surprise that at its formation, more than half the PAP's founders were active unionists or union leaders.

In the meantime, the proscribed Communist Party of Malaya (CPM) had adopted a two-pronged strategy to displace the British. The first was the armed struggle in the jungles of Malaya, and the second, an 'open front' strategy in which CPM elements would infiltrate legally-constituted organisations such as trade unions, alumni associations and old boys' associations and use these organisations as tools for a 'constitutional struggle'.

Starting in 1955, the militant left-wing unions began agitating and calling for strikes and sympathy strikes at the slightest provocation. That year, there were 275 strikes alone, compared with 12 strikes in the preceding two years. This represented a loss of 946,000 man-days of work. The worst of these strikes, involving the Hock Lee Bus Company in May 1955, led to widespread rioting in which four persons died and 31 were injured. In October 1956, following the Chinese Middle School riots, the Lim Yew Hock government approved a Special Branch security operation which resulted in the arrest of some 295 unionists, including Lim Chin Siong and Fong Swee Suan and the SFSWU was dissolved by the Registrar of Societies. This effectively removed the top level Open Front leaders from the scene and resulted in the immediate reduction of labour stoppages and strikes.

The People's Action Party (PAP) won the 1959 general election on the back of left-wing trade union support. The new Government promised to achieve ‘industrial peace with justice'.

The PAP had won the 1959 election on the back of trade union support, much of which came from the left-wing unions. The moderate non-Communist leadership within the Party knew that while it was necessary to control the unions and prevent them from disrupting Singapore’s economic life, they were not yet strong enough to break with the pro-Communists. The Party promised to achieve ‘industrial peace with justice’. It saw as its primary task, the building of a ‘climate of confidence under which trade expansion and industrial growth can take place.’ It announced that legislation would be introduced for unions’ compulsory registration and vowed to cancel registration of ‘yellow’ unions: unions that were sponsored by employers to weaken genuine unions and splinter unions formed by unelected former officials to create industrial disharmony.

In August 1959, the Government introduced the Trade Unions (Amendment) Bill to empower the Registrar of Trade Unions to refuse registration of any union and to deregister any union. The following year, the Government sought to amend the Act again and proposed that any union seeking registration had to have at least 250 members; and that they belong to one of the 19 categories stipulated in the Act.

The Bill further provided that no person could be registered in more than one category; and finally that all unions should belong to ‘an association of trade unions’ – obviously referring to the Singapore Trades Union Congress (STUC).

However, the PAP leaders had second thoughts, fearing that a unified labour movement at this point would prove to be an easy target for the Communists, and allowed the Bill to lapse. In the meantime, the Government continued to proclaim its resolve to forge a unified union movement led by the STUC and encouraged aligned and allied trade unions to amalgamate. For example, the Amalgamated Union of Public Employees, which was formed in September 1959 consisted of eight government City Council and statutory employee unions.

On 1 November 1959, the STUC moved from its premises in Towner Road into its new headquarters on Queen Street, occupying a three-storey building formerly belonging to the Nantina Home for the aged. Initially, the Government had offered the STUC an old Government bungalow on Canning Rise for use but this was found unsuitable.